Unlike most of the financial services industry, cryptocurrencies have largely been allowed to operate in the US without any significant regulation. A distinction that is likely to soon change. Federal authorities have grown increasingly interested in dollar backed stablecoins and have signaled they may be getting ready to take action. Part of the government’s rational lies in the argument that these assets very closely resemble bank deposits and money market funds - both already heavily regulated. The other part lies in the consideration that these stablecoins, as a crypto based dollar proxy, have the potential to move beyond their current role as a liquidity tool for cryptocurrency markets and become more widely used in the world’s payment ecosystems and financial markets. The goal for any regulation then would be to insure this prospect does not introduce a destabilizing risk to the existing infrastructure.

Given this context, how then are dollar backed stablecoins like money market funds, and is regulation really the way to go? The rest of this post looks at both questions.

Note: This post is a follow up to an earlier one that takes a broader look at stablecoins. If stablecoins are a relatively new subject to you, then that post: here can help with background and conceptual information.

Aside from the physical cash we may sometimes carry and outside long term investments, most people keep their cash in various bank accounts and money market funds. These are seen as convenient and safe places to store cash until it is needed. It is generally understood a money market fund usually yields a slightly higher return than a savings account, but as to what constitutes an “account” versus a “fund” or even how they relate is often a little less clear. Some of those distinctions are highlighted here:

Since a regular mutual fund can be invested in many asset types, the gray dashed line groups the account and fund types that are typically viewed as cash equivalents. Notably, these instruments are used as a store of value for their holders. A dollar in now equals a dollar out later. Money market funds (MMFs) typically designate holdings as shares that are valued at a dollar each.

How these shares are valued and exchanged for dollars is illustrated below:

Tether (USDT), introduced in 2014, was the first dollar backed stablecoin. Since then many others like Binance USD (BUSD), USD Coin (USDC), and Gemini dollar (GUSD) have been issued. All of these stablecoins are pegged to the US Dollar so that one token equals $1. As a dollar proxy in crypto transactions, they are used as a medium of exchange that is often cheaper, quicker, and easier to use than actual dollars. In turbulent markets they can be used as store of value by moving volatile holdings into cash and they open the door to many decentralized finance (DeFi) applications that simply can not be done with real currencies. The process to create the dollar backing is as follows:

The first thing that should be immediately obvious, momentarily ignoring the grayed out box, is how similar this looks to a money market fund. Tokens are received in exchange for dollars, which are then managed by a custodian to provide the valuation basis for the tokens. Later, tokens may be redeemed for dollars at the same 1:1 exchange rate. That these stablecoins can be used as a medium of exchange, unlike MMF shares, or that the stablecoin custodian accrues all of the reserve earnings instead of a MMF shareholder is more of a reflection on how these two financial instruments pursue different incentive objectives while functioning as value containers more than anything else.

Back to that grayed out box. Every dollar pegged stablecoin is “fully backed 1:1 with a real US dollar”. At least that was the claim every one of these stablecoin issuers had been making until this past spring. The notion probably helped new users better understand dollar backed stablecoins as an emerging cryptocurrency. But if that is one of the value propostions employed to sell users on, and it was, then any reputable entity (especially dealing with financial products) knows the representation also needs to be true.

Prior to this last spring, Tether and USD Coin - a combined 77% of the stablecoin market by market share - had been under pressure to demonstrate their tokens had adequate reserves. While each susbequently released disclosures showing their tokens were sufficiently backed, both received a fair amount of blowback when the market learned they were each holding far less cash than had been claimed.[1],[2] In Tether’s case, it was further criticized for also not releasing enough information about the quality of the other assets being held.

[1] As a counterpoint, it should be noted both Binance USD and Gemini dollar regularly disclose their reserve holdings to be essentially in line with the 1:1 dollar claim. Helpful, but they only represent roughly 10% of the stablecoin market.

[2] There is of course a whole side discussion as to whether dollar backed stablecoins need to hold all of their reserve assets in real dollars. If money market funds can be a $3 trillion dollar industry and generally regarded as a safe cash equivalent, then probably there is room for these stablecoins to be similarly backed.

Regulation is tricky and seemingly never without controversey. Too much can cripple industries and stifle innovation, while too little or none at all can lead to unchecked power accumulation and a variety of public harms. The challenge of course is weighing how much is needed to promote a public good versus letting markets be free. The US financial system is heavily regulated yet generally regarded as an open market. This is in part because the regulation that exists tends to focus on promoting stability and trust in the financial system through policies that protect not only consumers and investors but also market efficiency and integrity.

A benefit of this regulation is that I don’t have to worry about losing my bank deposits if my bank fails because I know the deposits are guaranteed by the FDIC. And while my money market investments don’t have the same safety net, I consider them relatively risk free because securities regulation requires that I have access to information about their operating procedures and detail on the type and quality of assets they hold and are allowed to hold.

USD stablecoins have succeeded thus far without any regulation because they fill a useful liquidity niche in cryptocurrency markets. Their valuation risk has been largely ignored by short term holders because they are not in the asset long enough to worry about it. Tether’s daily volume usually exceeds its circulating supply which implies extremely short holding periods. But in other areas, like as a general payment vehicle, or even in crypto lending - where these stablecoins are frequently used, then valuation risk becomes a more pressing concern.

In September, the SEC threated to sue Coinbase over its planned Lend program. Under the plan, Coinbase users holding USDC would have been allowed to loan those tokens and earn 4% interest. Presumably that would have looked something like this: 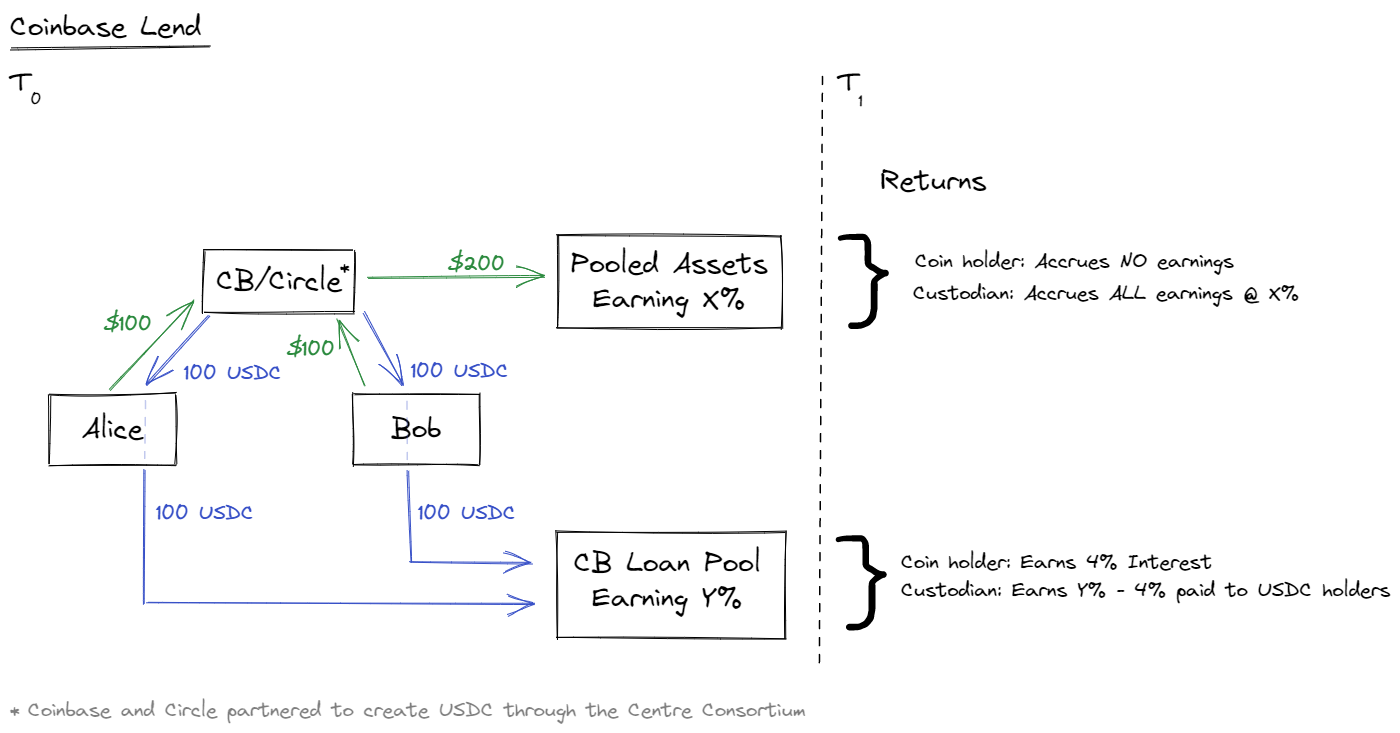 While Coinbase disputed the SEC’s contention that Lend was a security [3], they dropped the program soon afterwards. Other exchanges offer similiar stablecoin yield products to Coinbase’s Lend, but as a publicly traded company and one of the largest cryptocurrency exchanges in the US, the SEC probably decided to send a message with its threatened Coinbase lawsuit in an effort to slow growth in these products. It’s not hard to see the valuation risk in these stablecoins getting amplified the more they get built into different financial products. Conceivably, someone could construct a hybrid fund containing loaned dollar backed stablecoins and money market assets. That may sound like a pretty safe investment, but how would you know for sure if there are no legal requirements on these stablecoin issuers to publicly disclose their holdings? As Tether and USD Coin have shown, accurate representation is not a priority for all issuers. The more these stablecoins are are built into various financial products or accepted as payment or even as collateral, then the more widespread damage they may cause if even one of them were deemed worthless or to encounter it’s own liquidity crisis.[4]

While they are promoted as safe and stable cryptocurrencies, dollar backed stablecoins are still speculative assets. To move beyond that designation, some form of regulation will be needed to establish reporting standards and general operating principles so that the risk profile of all dollar backed stablecoins can be properly understood. There are many good applications for these stablecoins. Part of their success path is they will need to be considered a good cash equivalent instead of just looking like one.

Other worthwhile posts and resources related to this subject:


[3] See Howey Test; one of the ways to determine if something is a security, and Coinbase’s response.

[4] Tokens are redeemable. If enough real cash is not held to satisfy all redemptions the stablecoin will experience a liquidity crisis. Also see Money Market Mayhem: The Reserve fund Meltdown. 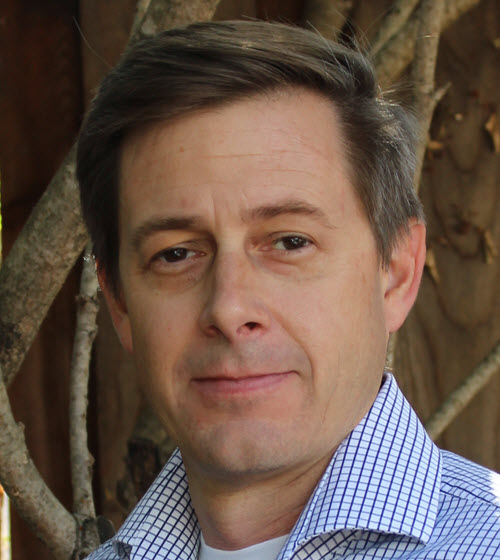